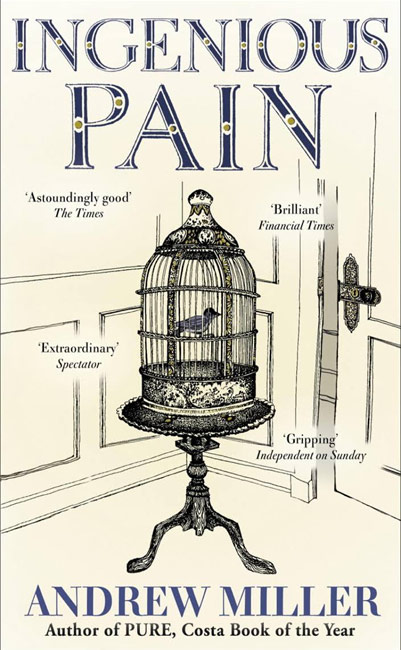 A really remarkable first novel ... Miller's narrative is gripping and his imagination extraordinary

At the dawn of the Enlightenment, James Dyer is born unable to feel pain. A source of wonder and scientific curiosity as a child, he rises through the ranks of Georgian society to become a brilliant surgeon. Yet as a human being he fails, for he can no more feel love and compassion than pain. Until, en route to St Petersburg to inoculate the Empress Catherine against smallpox, he meets his nemesis and saviour.

Andrew Miller's first novel, Ingenious Pain, was published by Sceptre in 1997 and greeted as the debut of an outstanding new writer. It won the James Tait Black Memorial Prize, the International IMPAC Dublin Literary Award and the Grinzane Cavour Prize for the best foreign novel published in Italy.

It was followed by Casanova, then Oxygen, which was shortlisted for both the Booker Prize and the Whitbread Novel of the Year Award in 2001, The Optimists, and One Morning Like A Bird. In 2011, his sixth novel, Pure, was published to great acclaim and went on to win the Costa Book of the Year Award.

Andrew Miller's novels have been translated into thirty languages. Born in Bristol in 1960, he has lived in Spain, Japan, France and Ireland, and currently lives in Somerset.

A really remarkable first novel ... Miller's narrative is gripping and his imagination extraordinary